A fire on Miller’s Lane early in 1925 demonstrated the urgent need for adequate fire protection and may be credited with having prompted the founding of Loyalsock Volunteer Fire Co. No. 1. Many discussions among various citizens and groups climaxed with a meeting of a group of citizens in the Belles Garage on East Third Street in the evening of March 12, 1925 in exasperation over grass and farm fires the city departments weren't doing much about. Forty-Six people attended this meeting and definite action was taken to form a volunteer fire company including election of officers and a fire chief. Election of first Fire Chief was held and awarded to Walter Belles.

A chemical tank mounted on a car donated by one of the members and was used to answer alarms until suitable equipment could be purchased. The first change came when Williamsport Fire Department donated the "First Charge" for the tank.The expenses for the first year were about $6,500.00 which came from the members and some loans.  Also, at one of the early meetings, the Faxon Land Company offered a site for a future fire house.

In June of 1925, the company purchased a new Ford truck chassis to be equipped as a fire truck. Two chemical tanks and other pieces of equipment were mounted on the truck. This equipment, along with additional items purchased from time to time, served the company well. After becoming equipped to protect the property in the township, the next problem was the planning and financing of a building to house this apparatus. The necessary funds were raised by subscriptions and loans and a committee was appointed in July of 1926 to draft plans for the new building. Faxon Land Company donated two buildings which the members razed and used in the construction of the original fire house. The cooperation and faithful labor of these early members made it possible to dedicate the new building on May 30, 1928. 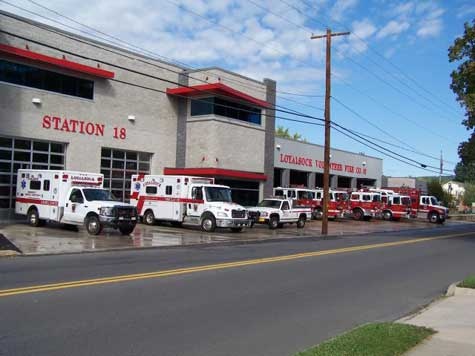 Looking to the future, these same members saw the need for a permanent organization. The court was petitioned and a charter was granted to the Loyalsock Volunteer Fire Company No. 1 on October 27, 1927. Twenty-seven members were names as subscribers. As time progressed, the firefighting equipment was augmented by a reo pumper and a Lincoln truck. The equipment from the Ford truck was transferred to the Lincoln and it was outfitted with a front mount pump. At about the same time period, fire hydrants began to appear in the more populated areas of the township which greatly improved the fire protection for the property owner.

Faxon Land Company donated land on Northway Road for the future home of the fire company. On May 30, 1928, Loyalsock Volunteer Fire Company No. 1 dedicated its first firehouse. A plot of land between Third Street and Washington Blvd, was loaned to the department for fundraising events like the ox roast. Other early fundraisers included ice cream socials hosted by the Ladies Auxiliary. The events evolved into the carnival that was enjoyed by area residents for decades. The carnivals were held at the present site for many years through the courtesy of the Faxon Land Company. Fire company members realized that this ideal location was largely responsible for the financial success of the carnival. When Faxon Land Company had a buyer for the vacant lot, the fire company was forced to either buy the lot or relinquish the desirable carnival site. The company purchased the lot for $22,000.00 and later two adjacent pieces of land to enlarge the carnival grounds. A concrete block building was erected to serve as a storage room and bingo display stand as well as housing rest rooms. Two additions were made to the original building and a new permanent building was erected at the west end of the lot by the members.

In June 1940, a modern Mack pumper was purchased. The members of the fire company were justly proud. It was the first completely new piece of apparatus for the company. In 1947, the company realized a need for a community ambulance which resulted in the organization of an ambulance service in which memberships were sold for a nominal fee. At this time the company purchased a new Cadillac ambulance. Four years later the company felt that a new ambulance was needed and a 1951 ambulance was purchased. Rather than trade the older vehicle, it was decided to keep it. The benefits of this plan have proven note worthy throughout the years as this allows one vehicle to be in service to the community at all times. One ambulance responds to all fire alarms and in several instances has rendered valuable service in taking injured firemen to the hospital. The second ambulance remains at the firehouse ready to serve the community with emergency or out of town calls. The ambulances have been replaced from time to time, as needed, and the service has been self-supporting since its inception.

The company responded to 20-50 calls during the 1950's. Calls were received at the homes of fire officers, who then responded to the station and sounded the siren. Response time to a call 1/2 mile from the station was documented at seven minutes. Membership at that time was limited to 60 members and there was a waiting list to join. The company's assets totaled $100,000.00 in 1950.

It was in the same year, 1951, which steps were taken to provide communication equipment for the fire company. The first step was to install two-way radios in all of the fire apparatus and ambulances. The company enjoyed progressive leadership throughout its history. In March of 1950, the Saturday Evening Post ran an article about Loyalsock Volunteer Fire Co. No. 1 as being typical of the beset of volunteer fire companies in the United States. The members were justly proud of this recognition. It is interesting to note that in the 55 years since the fire company was organized, the population of Loyalsock Township has increased more than fivefold along with a tremendous growth in commercial and industrial establishments. Needless to say, as the growth occurred the need for more equipment and larger facilities also became apparent. The Loyalsock Volunteer Fire Co. No. 1 kept up with this growth with the purchase of new equipment. In 1953, it became apparent that larger facilities were needed and an addition to the old building was completed in 1954 giving additional space for four more pieces of fire apparatus as well as necessary supporting equipment. On June 6, 1954, an Open House was hosted to celebrate the new addition to the firehall. Its cost was $25.000.00. The new station could now house six trucks and two ambulances. There were even automatic doors that opened in response to the alarms.

Growth continued through the years as additional trucks and equipment were purchased. Again, we were outgrowing our quarters so in 1971, a committee was appointed to draft plans for an all new building. On April 15, 1975, the present day fire house was constructed. Continuing with the tradition set, the culmination of their efforts resulted in one of the most modern fire stations in the country. As of October 2008, we have yet expanded out facility and equipment. We added a $2.2 million dollar addition which includes two more bays, an upstairs with a large recreation room, kitchen, weight facilities, and numerous separate sleeping quarters. We now have 3 ambulances, a Rescue, Engine, Tanker, Tower, Brush truck, Special Unit, Mobile Air, and a Mobile Command Unit.

While the improvements, changes in equipment, and buildings have continued, none of these are much value unless the firefighters themselves are properly trained and kept updated with the latest teaching and practices of firefighting and emergency medicine. Classes and specialized schools are held constantly throughout the year in all phases of firefighting, first aid / para-medicine training, and hazardous materials. Advancement in science and technology are never ending and we strive to see members of fire company are always up to date.

The philosophy that was recorded in 1950 remains today: "To provide the community with better fire protection as accomplished with well trained firemen and modern efficient equipment and apparatus." The members serve without pay, but with dedication and community service in mind. Legacy continues in serving our neighbors and protection to the community. 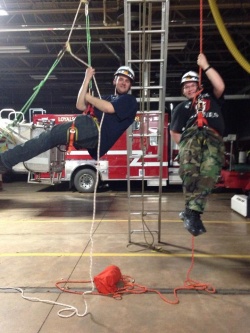 This site has been viewed 72,852 times.
Calls
News
Events
Pictures
Apparatus
FollowTweet
Maintained by the members and staff of Loyalsock Volunteer Fire Company. Designated trademarks and brands are the property of their respective owners. Copyright © 2006-2022. YourFirstDue Inc. All Rights Reserved. Content on this web site is supplied by Loyalsock Volunteer Fire Company. YourFirstDue Inc. cannot be held responsible or liable for any content, text, pictures, or any other media found on this web site.
Management login
Powered by