A fire on Miller’s Lane early in 1925 demonstrated the urgent need for adequate fire protection and may be credited with having prompted the founding of Loyalsock Volunteer Fire Co. No. 1. Many discussions among various citizens and groups climaxed with a meeting of a group of citizens in the Belles Garage on East Third Street in the evening of March 12, 1925. Forty-Six people attended this meeting and definite action was taken to form a volunteer fire company including election of officers and a fire chief.

A chemical tank mounted on a car donated by one of the members and was used to answer alarms until suitable equipment could be purchased. In June of 1925, the company purchased a new Ford truck chassis to be equipped as a fire truck. Two chemical tanks and other pieces of equipment were mounted on the truck. This equipment, along with additional items purchased from time to time, served the company well. After becoming equipped to protect the property in the township, the next problem was the planning and financing of a building to house this apparatus. The necessary funds were raised by subscriptions and loans and a committee was appointed in July of 1926 to draft plans for the new building. Faxon Land Company donated two buildings which the members razed and used in the construction of the original fire house. The cooperation and faithful labor of these early members made it possible to dedicate the new building on May 30, 1928.

Looking to the future, these same members saw the need for a permanent organization. The court was petitioned and a charter was granted to the Loyalsock Volunteer Fire Company No. 1 on October 27, 1927. Twenty-seven members were names as subscribers. As time progressed, the firefighting equipment was augmented by a reo pumper and a Lincoln truck. The equipment from the Ford truck was transferred to the Lincoln and it was outfitted with a front mount pump. At about the same time period, fire hydrants began to appear in the more populated areas of the township which greatly improved the fire protection for the property owner. In June 1940, a modern Mack pumper was purchased. The members of the fire company were justly proud. It was the first completely new piece of apparatus for the company.

Loyalsock Volunteer Fire Company No. 1 has provided Fire, Rescue, and Emergency Medical Services to our township for over 90 years. While not everyone can volunteer as a Firefighter or Emergency Medical Technician (EMT), everyone can help in some way. Our volunteers are devoted to helping others and find it difficult to ask for help ourselves at times. There just is not enough time in the day for volunteers to respond to emergencies in the community and work fundraisers to support the operations of the station.

We need your help. TAX-DEDUCTIBLE donations will enable us to continue to respond at the high level of service you need, deserve, and have come to expect. Please click here to fill out the our annual fire drive form and return it to following address with your donation: Loyalsock Volunteer Fire Company, 715 Northway Road, Williamsport PA 17701.

Your support will help us to continue responding rapidly and effectively with the best equipped and highest trained personnel. 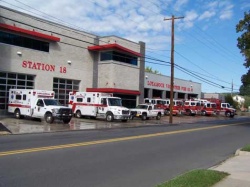 This site has been viewed 65,581 times.
Calls
News
Events
Pictures
Apparatus
FollowTweet
Maintained by the members and staff of Loyalsock Volunteer Fire Company. Designated trademarks and brands are the property of their respective owners. Copyright © 2006-2022. YourFirstDue Inc. All Rights Reserved. Content on this web site is supplied by Loyalsock Volunteer Fire Company. YourFirstDue Inc. cannot be held responsible or liable for any content, text, pictures, or any other media found on this web site.
Management login
Powered by